Back when Ev Williams, co-founder of Twitter, announced the project, he defined the company’s mission along the lines of these three goals:

A recent article by The New York Times discussed what happened with Evernote, another Silicon Valley unicorn which has struggled to find footing. Evernote is wildly successful by some metrics, with nearly 225 million users and over 8 billion notes working on its platform. Evernote has had a wild ride since it was founded nearly 15 years ago, with four CEOs, rounds of layoffs and offices shuttering. It’s a tool that many use, solves a real problem, but does not monetise into a billion dollar company, but would run well as 'just' a multi-million dollar company.

By accepting venture capital, Medium has exposed itself to the same type of pressures that Evernote faced - a huge IPO/exit. Like Evernote, Medium is relatively successful, with over 7.5 million posts written in 2016, yet after trying many different business models, clearly it’s been struggling to monetise.

After realising they couldn’t indefinitely burn VC cash, they decided to forgo their original commitment to being advertiser-free and got into ad business to help creators monetise, however they quickly ditched the idea calling the digital ad system "broken". After pivoting to subscription memberships, hopefully they’re more stable now, however I do have my doubts that subscriptions can scale to the level of exit they need. Time will tell.

Because of this, user experience across Medium has demonstrably suffered, with pop-ups and banner ads pushing users to purchase a subscription, something Google frowns upon on mobile. 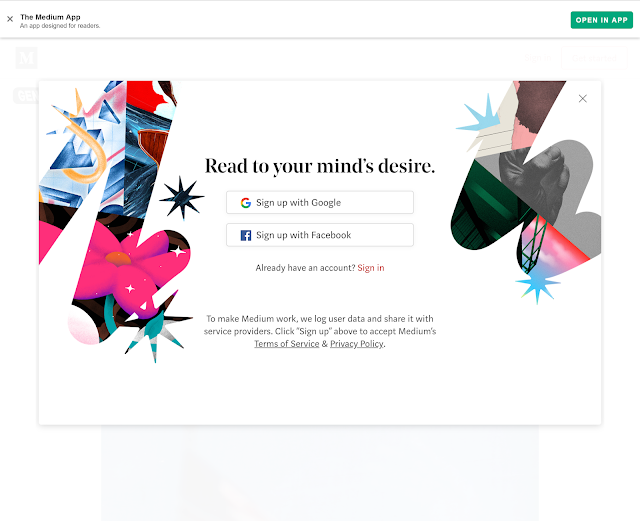 Maybe Medium is a more sustainable business now - I hope so, it has done many things right and deserves success. But one thing is sure, the UX is getting worse by the day, more content is getting paywalled, and they’ve shown over and over they’re willing to sacrifice the principles they were founded upon to monetise.